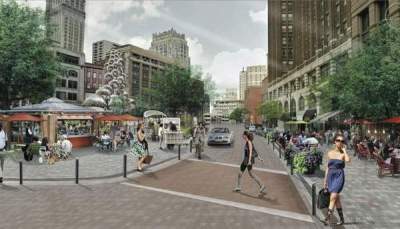 Placemaking is the word of the day here in the D.  Our billionaire patron, Dan Gilbert, had a pep rally to reveal his long term plans for downtown.  I watched about 30 minutes of the event as it streamed this afternoon and was impressed.  He’s working hard to make Detroit a great place.  He’s carved out his part of town [below] and is covering every base to ensure it is successful.  He started by bringing jobs to the city and now he’s focusing on the residential and retail side of things. 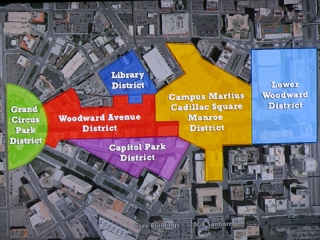 As far as I’m concerned Detroit will never get off the ground without people willing to live here and – aside from public safety and school – retail is the most important thing (I am not living more than 10 minutes away from a Target).  For years I’ve been saying the city needs an infusion of concentrated stores to create a shopping district.  I think Gilbert agrees and I’m anxiously awaiting his big announcement.
Detroit has a LOT of problems but I think the tide may finally be turning.  I can’t imagine what the city would be like if people actually lived there and I’m anxious to see it first hand.  I’d even want to be apart of it.  I plan to stay put for the next 5 years but when the time comes for Danny and I to move we want to be able to consider the city as a viable option.