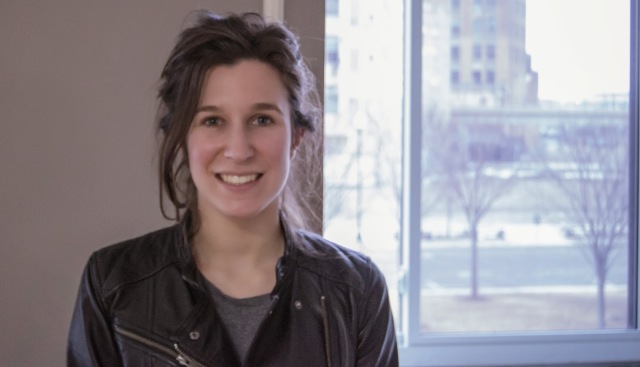 When I read authentic French lava cakes had made their way to Detroit a couple months ago I immediately forwarded the link to Danny as a Valentine’s Day plea.  Danny didn’t disappoint and neither did the dessert.  It’s now our favorite treat.  As a Europhile I couldn’t help but wonder what would bring someone from Paris to Detroit.  Yes, we are the Paris of the Midwest but still…

Lucky for me Chloe was willing to meet and answer a few questions.  Super stylish and very nice, her passion for what she does and her love for Detroit is evident.  I’m excited to share our discussion and STRONGLY encourage you to order lava cakes from Chez Chloe.  My personal favorite is the salted caramel.

What brought you to Detroit?

My boyfriend.  I met him a few years ago in New York and I came here to Detroit several times.  I started making my lava cakes for his friends and his family.  It was a new thing to them and they started to ask for me to bring cakes if we went to parties or dinner.  Then one day he started saying ‘You should sell them’.  And I was like ‘no’.  I studied marketing and communication.  It was my hobby, I grew up baking all the time and I love chocolate.

Were your friends and family concerned when you said you were coming to Detroit?  How did they feel about that decision?
My friends thought it was cool to move to Detroit because this is the place to be.  It’s the new Berlin.  My parents came to visit so they know more.  The first time I came here my father Googled Detroit and found on Wikipedia ‘the 1 crime city’, very dangerous city, racism and all the things so he told me not to go.  I was already there – it was too late.

What have you found out about Detroit that surprises you?
There is what you can find on the news and internet that is bad.  Bad about Detroit – especially these past two years. And now I’ve seen it in the last year, there’s a lot of entrepreneurs coming here.  There is this movement of young people that you cannot find somewhere else.  Basically if you go to New York it’s very hard to start a business because you have a lot of competitors. It’s very hard to be unique and to be known in this world.

Detroit is a small village.  I started at Eastern Market.  Eastern Market is the place to be in Detroit.  By being in Eastern Market, I’m part of Food Lab.  It’s an organization for food entrepreneurs and they introduced me to everybody in Detroit.  Thanks to Food Lab I was introduced to Detroit Kitchen Connect.  It’s a shared kitchen.  I rent it hourly and it’s a great advantage.

I love knowing a lot of people already.  People who are in Detroit they love the city.  They love it and they’re trying to rebuild it.  People are happy when they live here. Otherwise, they’d have to leave and go to New York or Chicago or go to another city.  The people living here love that the city has a soul – that is very important.  When you walk downtown you feel the history. You can imagine what happened 60 years ago.

Your lava cakes are phenomenal.  I almost ate one before we started.  What made you chose them.  Is it a common dessert in France?
Lava cakes are a French dessert. It’s on the menu at almost every restaurant in Paris. It’s a trendy dessert that you have on the menu and there is vanilla ice cream with it all the time. Coming here I noticed everybody knows a lava cake but you cannot find a lava cake. Or you go to Whole Foods or Trader Joe’s to buy a frozen lava cake. Disgusting [whispers]. I decided to reinterpret the French dessert and create different flavors and make it accessible. People can call me and I deliver or they can pick it up or it’s at cafes and restaurants.  I do events as well: weddings, baby showers and other things.  I only do lava cakes. Different sizes, different flavors.

Do you plan to expand to different desserts?
Not now. Maybe in the future.

Do you want a storefront in the future?
Maybe yes. Once the demand is there. I’m still in the first phase.  A lot of people don’t know me, especially in the suburbs.  My new objective is to expand in the suburbs and once I have enough demand and enough traffic I might open something.

One thought on “Life in Detroit: Chloe”