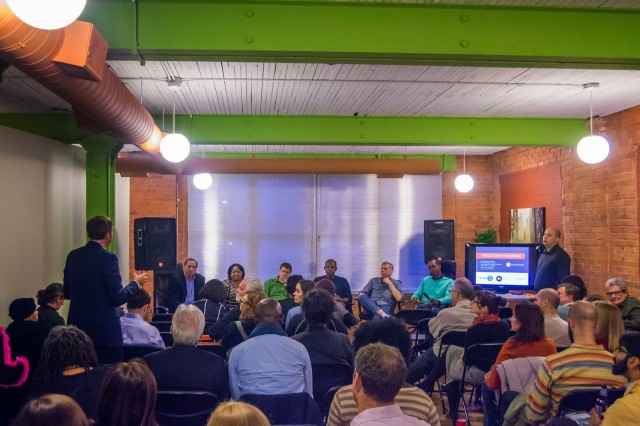 I’m not a great extrovert.  I don’t mind putting myself out there but it’s not easy for me to approach a stranger and start a conversation. It’s something I’m actively working on and Model D events are a great place to practice because they attract people who are looking to make a connection.  Yesterday was a long day and I couldn’t muster my usual enthusiasm for adventure.  Consequently, my default of sitting in a corner, listening to the presentation and going home was a likely possibility.

Fortunately, the environment prevented me from being a hermit.  Although I wasn’t on my A-game, I did introduce myself to a couple people, this led to other introductions and some people introduced themselves to me.  By the end of the night I met ten new people and plan to meet up with one woman this weekend – not too bad.

On to the event…

The panel discussion on the Culture of Co-working was hosted by Bamboo, a co-working space downtown. Prior to this event I associated co-working spaces with the city.  I figured it was a new-age hipster concept, sprouting up in progressive neighborhoods.  Turns out they’re everywhere including my hometown Livonia (a conservative suburb).

What is a co-working space?
I would define it as a work environment that brings together people who operate independently in order to create a sense of community and synergy.  Members are contract workers, entrepreneurs and in some cases corporate employees who enjoy an alternative work setting. For a nominal monthly fee (Ponyride costs $100), people have access to work space, meeting space, wireless internet and other amenities.  Each organization operates uniquely. Some cater to certain industries like technology, sustainability or the arts. Some are open 24 hours. Some have maker space for artists or builders. And some have private offices that can be rented.

It’s a concept I think will become more widespread in our increasingly transient society.  For better or worse, the traditional work world is changing and co-working spaces allow people to make connections and create a support network.  A refreshing thought since it is easy to get lost behind a computer in a closed office.  There are over a dozen co-working locations in Detroit and Co-Lab offers a list of most of them.