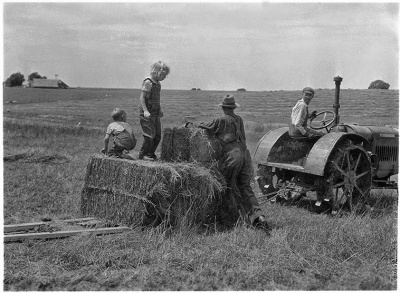 I rarely read modern fiction.  In my general quest to be productive I like to read non-fiction or classic literature.  That said, since I began taking writing more seriously I’ve started to feel like I should have a better understanding of fiction.  The fanfiction I write comes to mind without explanation and I’m too close to it to know if I have a style or how it flows.  Since I tend to read the best of the best and books written 100 years ago my point of reference for style is probably off.  Consequently, when I read about Jane Smiley’s novel Some Luck I was intrigued.  I was attracted to the multi-generational story because I don’t know the mechanics of writing beyond a single person narrative.  This lack of ability frustrates me and prompted my interest in the book.

Smiley’s writing fascinates me and I quickly became engrossed in the story of the Langdons. I don’t believe I have ever read from the perspective of an infant; however,Smiley takes on the challenge in multiple sections of the book.  The result is that the reader become highly invested in the characters from the start and are anxious to see how they grow.  Equally impressive, every character in the novel is thoroughly developed.  The changes in manners, interest and behavior are subtle and realistic.  You read the aging process. I’m envious of Smiley’s ability to hone even minute traits for dozens of characters.  It’s hard for me to believe the Langdons aren’t real and I wonder who her inspirations were.

The other component of Some Luck that leaves me awestruck is how Smiley integrates history and geography in the story.  She includes details on an array of topics including farm life, military campaigns and the New Jersey Turnpike.  This ability to understand a multitude of topics well enough to describe them is something I admire in most writers.  While reading this book, I began to appreciate the research required to write a good novel and re-evaluate my overall interest in modern literature.

Aside from becoming invested in the Langdons, Some Luck has also left me more appreciative of my own life.  I’m reminded to enjoy the smallest moments because they have meaning.  Each chapter covers one year in the family’s life and it is a bondafide reminder of how quickly time flies.  Some Luck is a trilogy and I am greatly anticipating the release of the next book.  If you haven’t gathered it already I highly recommend it.