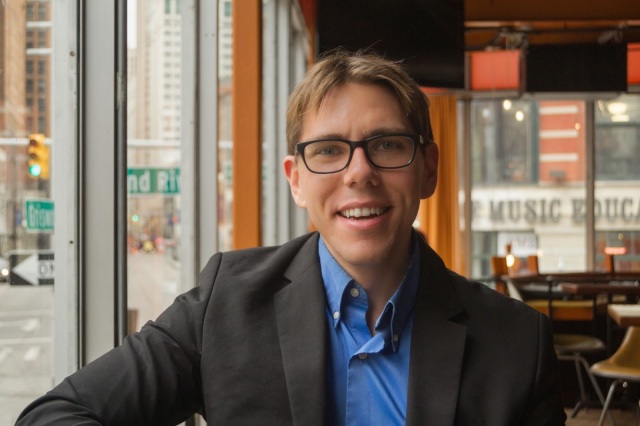 I hate driving. It tops my list of least favorite activities and I dream of the day when we can at the very least live in a one car household.* Consequently, when I heard about Freshwater Transit’s mission to advocate for public transit in the region and their video project, 15 Minutes or Better, I was intrigued. The short videos will give metro-Detroiters a look at how transit is done in other cities to increase basic knowledge of how and why people use public transportation.
It’s a simple concept, but for most people in our area the only time they use public transportation is when they’re on vacation. On every trip I’ve taken recently I’ve used light-rail or buses but I almost never do it here. My one attempt to take the park and ride commuter bus to work a couple years ago was pleasant, but also a disaster because I got on the wrong bus and ended up nowhere near my car. Fortunately, the bus driver was amazing and drove me home in her own car but it’s a perfect example of my limited knowledge of public transportation. We have the People Mover downtown but it’s service is semi-unpredictable. Case in point, I hoped to get a picture of it on Friday but it wasn’t running. The track loops downtown and is convenient on rainy or cold days; however, it takes me less time to walk from any given location than to ride 20 minutes.
Freshwater Transit is a consulting firm dedicated to helping local and regional authorities implement public transportation proposals and educating the community about the utility of public transit. I recently met with the company co-founder, Tom Choske, to learn more about their project and talk transit in metro Detroit.

There was a time when Detroit had one of the most sophisticated public transit systems in the country. Even suburbanites have stories about taking the streetcar into the city. Since people have experience, what do you think the disconnect is in understanding transit? Do you think it’s not necessarily a lack of knowledge but socioeconomic and racial divides that have stalled development of a public system?
I think it’s one and the same. The dismantling [of the streetcars] began in the 40s as we moved to buses. It was a big thing for the “Motor City” and it made sense at the time because buses were easier to maintain and had lower costs. Since that time there have been these socioeconomic and racial barriers. We have seen white flight from the city of Detroit, now we’re seeing black flight. There are these wealthy enclaves, there are these terribly impoverished enclaves, there is no real way to connect them. People come down to Detroit from Rochester to go to a Tigers game, they drive on freeways that are below ground so they can’t see anything, they get right to the stadium and park, they go right in and they go right out and they’re done. People are really disconnected. Public transit gives us an opportunity to break down those barriers. The socioeconomic divides become moot and we can start to overcome the racial divides.

What’s your objective with the 15 Minutes or Better project?

When you ask people about our transportation system they will say it’s broken, but few can articulate why or how it’s broken because they are not familiar with the terminology. It’s like with cars; people may not be mechanics but they have a basic understanding – it has an engine, a transmission, it has wheels. When your car is broken you don’t just say, ‘My car is broken, I don’t know what’s wrong with it, fix it.’ You say, ‘My car doesn’t work, I think it’s my radiator.’ When we get people to have that level of understanding they can start to say, ‘The problem with transportation is frequency. We need to increase frequency on this route so I can get around.’ Or there’s an issue of coverage – this area isn’t covered in the system. We want people to talk in those terms so that when they go to the ballot box or when they interact with their elected officials, they can have conversations that lead to real change.

Freshwater Transit has been firm in not advocating for a specific solution, why is that?
Because that needs to come from the community. We’re not here to prescribe a solution. That’s been part of the problem in the last 40 years. We’ve had insular groups who have come up with these grandiose schemes and plans, and we’ve seen them all fail. The true way to bring about public transit that is really effective in southeast Michigan is not to have more people sitting in an ivory tower, it’s to have the wider populous involved, informed, and engaged.


Do you think the M-1 rail is an example of the ivory tower or do you think it’s community engagement?
M-1 has the potential to be community engagement. It services a small area but it has the potential to be connected with other projects. It runs roughly 3.2 miles, connecting Jefferson to the New Center area at the AMTRAK station. If you were able to use that station for commuter heavy rail that runs on a regular basis between Pontiac and Detroit on existing tracks, we now have a way you can go from Pontiac to Hart Plaza without having to touch an automobile.

Do you think that’s a realistic possibility?

How do you feel the community has responded to your efforts?
This is a nexus time, there are so many things that are coming together in southeast Michigan. We are seeing that transit is something that people are starting to care about. As we approach people on the street they are saying, ‘Yeah this is a great idea, this is something I’ve been concerned about but I’ve never known what to do about it.’ It’s great that it’s at the forefront right now and we’re trying to see if we can use this project in concert with what everyone else is doing out there. We want to do our part to move the conversation to the next level.

There is a lot of activity going on right now. I think the development we are seeing is unprecedented. There have certainly been moments in our history where it seemed like Detroit was finally on the right track but then it falls off, this time it feels like it could actually happen. Considering how quickly downtown has evolved in the past two years, how do you think that will reflect in transit development?
When I look at what has changed in the past couple years, is the mental shift – there is a change in opinion and the people who have come to the forefront – elected officials and community leaders. That is exciting to us. The challenge is keeping these people engaged and empowering more people to take these leadership roles to keep the fight going. In the past we’ve had great people in great positions but they got bored, they retired, they moved on and things have fallen through. By having people engaged with a solid base of knowledge of what they want, that will make them hold whoever is in power accountable and that’s how we can keep it going.

Who do you think is doing it right on a Rust Belt city level? What do you think the potential really is here in Detroit?

The potential here in Detroit is a Detroit solution. I’m serious when I say that. While we can look at other cities for best practices, no one is doing it 100% right. We’re not advocating for the xerox method of transit – which has been another problem we’ve faced over the last 40 years – let’s take what they’re doing and copy and paste it here to see if it works. We’re unique here in the Rust Belt cities because we’re larger, we have a different geograpahy, our population is spread out differently, we have different commuter patterns as well. 60% of employed Detroit residents work outside of the city limits. So we have this weird reverse commute going on – half the working population is people from the suburbs going into the city and half the population is city workers going out to the suburbs. We have to focus on the smaller examples we can take. Maybe we like the way Madison, Wisconsin has their regional transit. Maybe we like the way Grand Rapids has implemented the bus rapid transit system. Or we like how Hawaii uses a 5013 non-profit as their local operator of their transit system. Let’s pick those best practices to see how we can create the best solution for Detroit.

If you want to learn more about the 15 Minutes or Better project visit the Freshwater Transit Patronicity page.


*First world problems I know, not to mention blasphemous from a Motor City girl