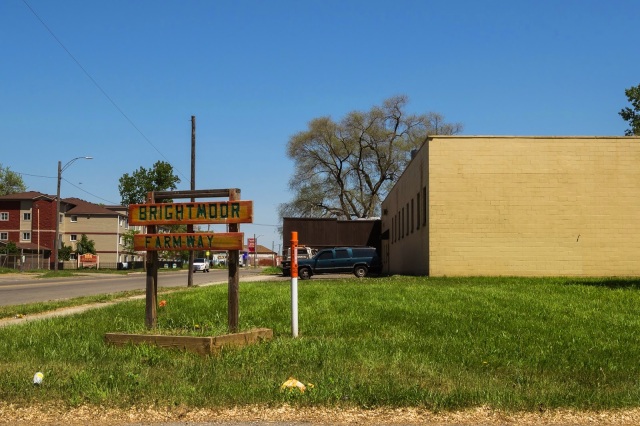 This weekend, Danny and I drove through different areas of the city to explore neighborhoods we normally don’t go to.  Top on my list was Brightmoor. Last year a long stretch of the freeway was closed and we drove down Fenkell every day. This sign was my greeting to Detroit and my first encounter with the neighborhood. I’ll admit Brightmoor hasn’t had the best reputation. High vacancy/abandonment and crime rates have not always attracted a positive image; however, in recent years the Brightmoor Alliance has worked diligently to transform the community. The group is highly regarded and their reputation proceeds them. Consequently, I wanted to take a peek at the work they are doing.

I was aware of the Restore the ‘Moor project and the overall idea that it would transform the vacant land. I was surprised to find an oasis just south of Fenkell with gardens, greenhouses and community art from each house to the next across several streets. I was awed by what we saw and tried not to be a nosy gawker.  When we got home I went to the Brightmoor Alliance page and found this video. I had no idea so many great projects were happening in the neighborhood, even as I drove by it every day for six months. It’s definitely a reminder that you should always scratch below the surface and I will be reaching out to the Alliance to learn more about their work. In the meantime, you can check out this great video: