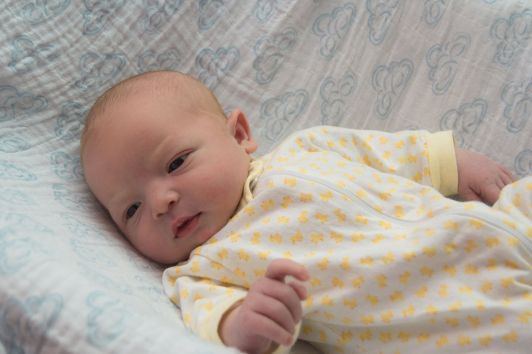 Our little big guy Lucas Mikhail came into the world on March 2nd at an unexpected 9lbs 1oz and it’s been the most wonderful, amazing 5 days. Danny and I are completely in love and spend our time telling him that.

What’s not to love? Look at that face! He’s the perfect blend of us. Danny’s blonde hair, blue eyes, forehead, and priceless facial expressions. He has my nose, lips and bent left ear (I can’t get over the last part).

He loves his hands so much that when they disappear in long sleeves he freaks out.

He’s does the best things with his pointer finger. He pensively thinks or points accusingly.

He crosses his legs all the time – I suppose it’s a habit after those cramped quarters.

He absolutely hates being cold. Diaper changes are a challenge because we have to take off clothes (Danny’s a trooper for taking on those duties).

I’m not at all surprised by the fact he is a restless sleeper. For months I was surrounded in bed by a loud and shaking Danny and a comparably wild baby on the inside. Some nights I couldn’t tell which fella was making moves. Lucas startles easily, moves his blanket around in his sleep and makes little noises. It gives me peace of mind more than anything to hear my noisy fellas throughout the night.

He’s a momma’s boy. As soon as he was born he stopped crying when I touched his cheek. At the hospital, nurses would want me to put my hands on him during tests because he would instantly calm down. He rarely cries when I’m around. It could be a newborn thing but I like to think that it’s a special bond.

So yes, this little guy will definitely be a blog focus – especially this week.

What date night looks like after a decade: • Popeyes = ❌ • Burger King = ❌ • Taco Bell = ✅ • DSO jazz performance = ⭐ • Nursing mom problems = 😳 • Crying baby and date cut short = ✓✓ 🤷 Love you Wordbird 💕
@sesamestreetlive is my favorite kids show. Sam looks skeptical but he LOVED it! He was dancing and clapping to all the songs. They played the Abby song Lucas has me sing him a million times when we was younger but he doesn't remember it. He did remember he wants to meet Elmo who came out to the crowd but but quite close enough so we had some tears. But a fun family outing nevertheless. ♥️
These boys can't get enough of dad. He's the first person they want every morning and it doesn't stop all day long. I can't blame then, he's a good one 🥰
“Life's most persistent and urgent question is, 'What are you doing for others?” Kindness is not easy. It requires you to step outside of your comfort zone (and occasionally give up some comforts) and value the needs and wants of others similarly to your own personal desires. It's often a thankless effort but that's the point of kindness - you do it to do it, not for a reward. It's also why kindness isn't popular - people want rewards. Every day I wake up determined to do more and do good. I don't always succeed of course but sometimes surviving to try again tomorrow is victory enough. I hope that my acts of kindness can inspire and encourage others to do the same - especially my boys. Today is not just a day off school or work, it's a day to take away from your traditional responsibilities and devote to others. We delivered feminine products and cupcakes to Alternatives for Girls and then stopped by a few fire stations in Detroit to deliver cookies and coffee. It was a simple action that was warmly received and brought me great joy because even though it's not always easy, kindness is always worth it. #MLKDayofService #BeKind