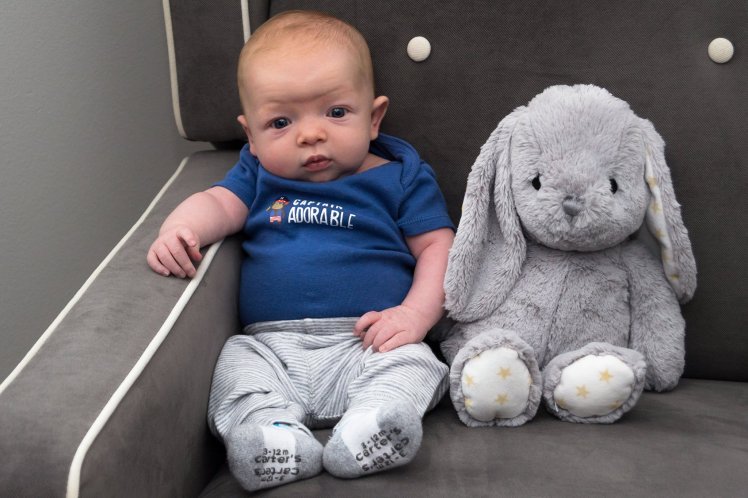 Lucas at one month is seriously as perfect as they come – look at that forehead, my Elmer Fud and his rabbit.

He’s not a crier or whiner.

He likes to be cuddled but he’s as content sleep in his cradle and he’s great about being passed around to his frequent stream of visitors.

His only demands are frequent feedings and on occasion being walked around the house. A couple leaky diapers/blowouts but I have not been peed on yet.

He LOVES to sit up. When he has mastered holding his head up – and he’s pretty good at it already – I’m going to get him a Bumbo and I’m pretty sure it will blow his mind.

He LOVES his hands and has no interest in being swaddled. His hand motions crack me up when he’s eating. He’ll rest one hand over another on his chest as if to say, ‘don’t bug me I’m busy’. Other times his holds his hands up in a stop position that is clearly meant to say he’s not done yet. The best is when he holds my finger to distract me so he can eat longer.

He’s definitely a hearty eater and after losing nearly a pound a few days after he was born he has since gained nearly two! From the looks of pictures, it appears he’s already as big as Danny was at 9 months.

He doesn’t have sleep schedule but tends to sleep 3-2-1 hour at night between feedings. He smiles, laughs, screams and cries in his sleep. He also has a tendency to appear awake but really be sleeping. As an over-protective mom, he has only been in his crib 3 times for short naps and otherwise sleeps in his cradle a foot or two away from me.

All of this cuteness when he’s sick too. I don’t know how we got so lucky. 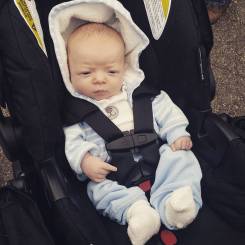 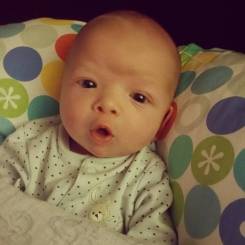 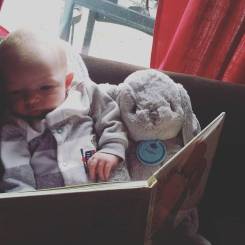