I’m a happy homebody but this week we decided to accept Cory’s invitation to visit him in Grand Rapids and I was reminded why it’s important to get out of the house and out of the county.

Cory’s neighborhood is in transition and from the looks of things it’s a great example of what a walkable, integrated neighborhood looks like. By integrated, I don’t mean race – although the area did appear to be ethnically diverse. There was a mix of multi-unit apartments, duplexes and single-family homes, stretches of commercial sections (new construction and renovated, corporate and independently owned shops) and green space. It was quite Utopian but you could tell it wasn’t always that way and that there is still work to be done because there are still abandoned buildings and homes.

Cory lives in a duplex from the 1800s and his neighborhood is almost exclusively beautiful old homes – including a Frank Lloyd Wright house.

I’ll admit I misjudged Grand Rapids and it was not the beacon of conservationism I believed. In fact it was the most liberal area I’ve driven/walked through in all of Michigan!  There were lawn signs for Hillary, #BlackLivesMatter and even a pro-immigration lawn sign! It was #NoH8 heaven.

Prior to this weekend, I felt that walkable living was a thing other states achieved and not Michigan. Now I think our community (southeastern Michigan) is even more impacted/influenced by the auto industry than I ever realized.  It was an eye-opening experience and I wonder what the potential is for a similar lifestyle in Detroit and the surrounding suburbs.

In the meantime, we’ll have to visit Cory more often! 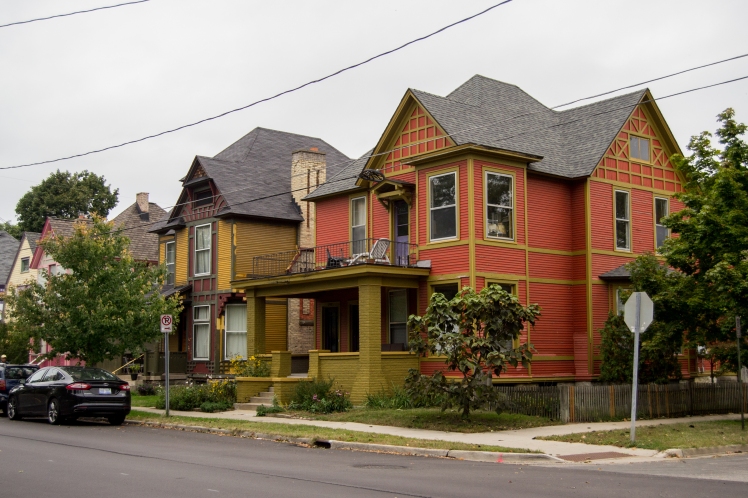 One thought on “Snapshot: Grand Rapids”