The current lore of Detroit includes the story that you can buy a house for a dollar (or close to it).  While the housing prices in the city are significantly below other areas, there is a big difference between buying a house and finding a home. My friends Chris and Emily spent a long time searching for the latter.
After over a year of searching they recently closed on a house in their dream location. I couldn’t be happier for them and am excited to learn more about what life is really like in Detroit. Since we have a 5 ½ year working relationship, I don’t feel shy about asking Chris anything; this includes, the uncomfortable subject of cost-of-living and crime. When Danny and I purchase a home we hope it’s in the city and I’m intrigued by their neighborhood. New Center is a name but not exactly a destination.  It’s the only neighborhood in the city’s core with a decent selection of (affordable) residential single family homes*; however, it does not attract the same development as other areas. That said, the M-1 rail is scheduled to be complete in a couple years and the line ends in New Center. With any luck the creation of public transit will stimulate more investment in the neighborhood.

Chris and Emily are in the midst of home renovation but took time last week to give me a before look and talk about their Detroit experience. 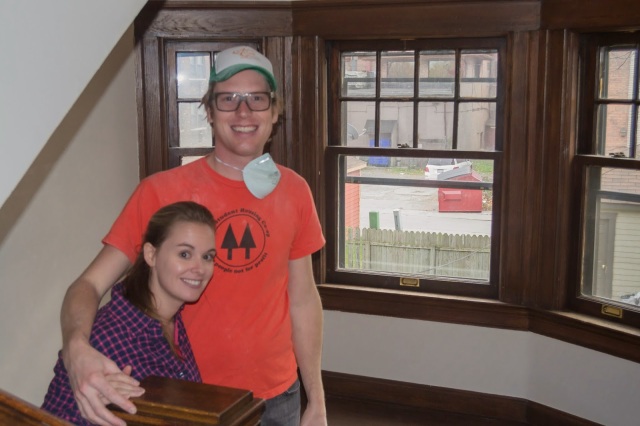 You guys were on the verge of packing your bags and skipping town a few times through this process.  What kept you from jumping ship?

Chris: Lack of job prospects in other cities. [laughs] What kept us from jumping ship? I guess the simple answer is we like it here.
Emily: It’s where we’re from.
Chris: We’re family people and we have a good community of friends. I think that also encourages us to giveback. It’s exciting, this idea of fixing up an old house and making something better.
Emily: I would add that we couldn’t take on a project like this in any other major U.S. city. The buy in in New York or even Baltimore or New Orleans will be much higher. In Detroit we can try to live the dream.

During the search you considered other neighborhoods but never felt the same connection you feel to New Center. What’s drawing you to the neighborhood?
Emily: There is a really strong community in this three block area. A homeowners association that seems to be more than a homeowners association.  I think it’s a network of people in similarly sized houses with similar problems, so if you need a radiator repair man you have a lot of people who can give you suggestions.
Chris: Back to Emily’s point of other cities – we wanted to live in an urban environment. A neighborhood like the University District or Grandmont Rosedale has beautiful neighborhoods with the style of homes we like but we’d still be driving wherever we wanted to go, we still would have felt removed from our friends. This area gave us that unique opportunity to live in a single family home right next to the Fisher Building, right by the Woodward corridor where they’re building the M-1 street car where hopefully one day we can take it to a Tiger’s game or to the DIA and feel very much a part of downtown in a way the other neighborhoods don’t offer.
Emily: And Woodward will be the first bus rapid transit line in the region so we could theoretically get to where our parents live in Royal Oak and Birmingham by using a bus.
Chris: Our dream is a one car household and we couldn’t have been able to achieve that in the University District.

I know you’re not thrilled with the security needs that are expected of life in Detroit.  At the same time there are security concerns you didn’t have before that you’ve mentioned, such as walking Tio at night or needing a club for the car.  How are you reconciling the conflict and where do you stand now?  Are you concerned about safety issues or do you think it’s hype?
Emily: I’d like to suggest that it’s hype but I don’t feel like I’ve lived in the city long enough to make that claim. I’m disappointed that we will have a security system. Having studied history, it’s been suggested that our fear of crime in this country has really increased since the 50’s and 60’s when in reality, violent crime has gone down. I do think there is a lot of hype and I struggle with that because I don’t want to buy in so I’m taking my cues from everyone I know that has a home in Detroit and I’m caving and getting a security system.  If in two years we haven’t had any problems I think we would revisit it. For now if even Pat Carey [friend/lifelong Detroit resident] suggests getting a security system – I’ll cave.
Chris: On the whole I feel comfortable in this neighborhood. I think the hard part with Detroit is that I feel really comfortable with these three blocks but if I went up to the fourth block I’d feel a lot less comfortable. But if I went south I feel pretty comfortable for quite awhile. The hard part is I feel comfortable here but it’s a small area.
Emily: To be fair we’d never walk our dog at midnight [even in Ferndale].
Chris: Like any other city you want to be aware of your surrounding and you don’t want to be a victim but I feel very comfortable. I want to emphasize that I’m not frightened.

You know my biggest city living concern is the costs.  How do you expect your budget to change now that you’re living in Detroit?
Emily: I think most people think it’s going to be more affordable and it is if you look at similarly sized properties but we upgraded. This is almost 1000 square feet more than our Ferndale house. We anticipate the cost of heating, electricity, doing work around the house – all those costs will go up because the house is bigger. We’re also going to pay more for property taxes. Taxes in Detroit are 12 mills higher than Ferndale – that’s about $1,000 more a year.
Chris: Our income tax will go up.
Emily: Our car insurance has gone up. Our homeowners insurance has gone up. The increased cost are there.  For us they are relatively nominal because we are getting more house.
Chris: One thing that surprised me is homeowners insurance actually didn’t go up all that much. Sure it went up but our house is older and bigger.
Emily: It also didn’t go up that much because we had a relationship with our insurance company. It seems that that’s a worthwhile relationship to build if you’re thinking about moving to the city.  AAA’s quote was thousands of dollars less per year and they basically told us it’s because we have a  relationship with them and we’ve been good clients. They were also really honest and said don’t make a claim unless somebody steals your car or your house burns down.
Chris: Inevitably our cost-of-living went up when we moved here but you get what you pay for.

The strength of Detroit living is the strong neighborhood organizations. How do you plan to connect with the community?
Chris: The Facebook group really made us feel comfortable about moving here because there was a sense of community.  Not just, ‘hey, who do I call when my radiator is broken’ – which is actually extremely helpful – but it was ‘hey, we’re carving pumpkins’ or ‘someone left their sweatshirt at the park’. It can be as important as I’m working with the city to make sure the lights in our alleyway stay on to relatively minor as a sweatshirt and that really encouraged us that this was a place people were looking out for each other.
Emily: Facebook is a nice way to start a connection. When we moved to the neighborhood somebody made the announcement and looped us in. It’s a starting point and we look forward to meeting everyone in person.
Chris: We are fortunate too because we already knew people who lived in this neighborhood. We were able to make connections so that when we moved in there were friendly faces.

Now that you live in the city you have lost the ability to excuse yourself from activity because of the ‘drive home’. How will city life change you?
Chris: We’ll be a lot more fun.
Emily: We’re looking forward to exploring what we have in New Center.
Chris: I’m excited Cafe Con Leche is coming. What I’m hoping we’ll do more of is the impulsive people hanging out. Just the other day friends of ours stopped by because they were getting brunch and wanted to see the house so they just stopped by.
Emily: I’m also a little nervous about that.  I look forward to having people over but we enjoy our downtime. Everyday being a night out, followed by brunch, followed by tv watching… I’m a little tired for that these days.
Chris: I don’t want to sound naive but I’m excited to be a true community participant and go to meetings and discuss the problems the city is facing as someone who lives here and not just someone who cares about it. Again, I don’t want to be naive because I just got here and I don’t want to pretend that I know what the problems really are. There are problems on the Eastside that aren’t in New Center so I don’t want it to sound like I’m here and I’m the solution but I am excited to be part of the conversation in a way before I felt I couldn’t be. I get to feel that I’m putting my money where my mouth is and even if that only makes me feel better – at least I feel better.

We have witnessed a lot of change in five years. What change do you want to see happen in one year?
Emily: I was going to say improve public transit but that will be a tough sell in a year.
Chris: In one year the changes are very micro: I want new paint on my house, I want a patio in the backyard, I’m looking forward to Cafe Con Leche.
Emily: I’d like to see occupancy rates go up. Our block is almost fully occupied but a few blocks up that’s not the case. I’d love to see improvement between the New Center Commons area and the North End. It’d be great to see more people move to the city. More houses occupied and houses that aren’t occupied or salvageable, deconstructed.
Chris: It’d also be interesting to see how retail develops downtown. Bedrock is taking a measured approach to the create districts and make sure businesses compliment each other. I’m thinking maybe we’re finally at the beginning of that and it will be interesting to see how that matures because it would be fun to go downtown and wander to go shopping on a variety of blocks.
Emily: And it will be fun to see how things develop on Grand and Woodward in advance of the M-1. To see if there is development up this far.

*Corktown has single family homes; however, they are mostly occupied and quite expensive.

One thought on “Life in Detroit: Chris & Emily”