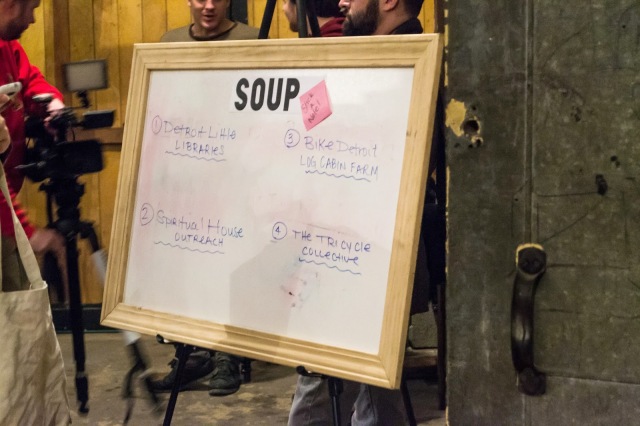 Detroit SOUP is everything I love about Detroit, city living and my generation.  For a suggested donation of $5 you get a homemade meal, a setting to connect with people invested in strengthening the community and the opportunity to make a difference by helping an organization/business receive money for a specified project.

I’ve read a lot of things about Detroit SOUP over the years but never found time to make an event – I was definitely missing out.  Located in the Jam Handy in the North End neighborhood, I was immediately taken by the building and will eventually write about the venue in its own right.  Aside from the awesome facility, we also quickly noticed a British filmographer and learned the BBC is doing a 30 minute special on Detroit SOUP and its program director Amy Kaherl.*  You know you’re in a hot spot when you meet the BBC. 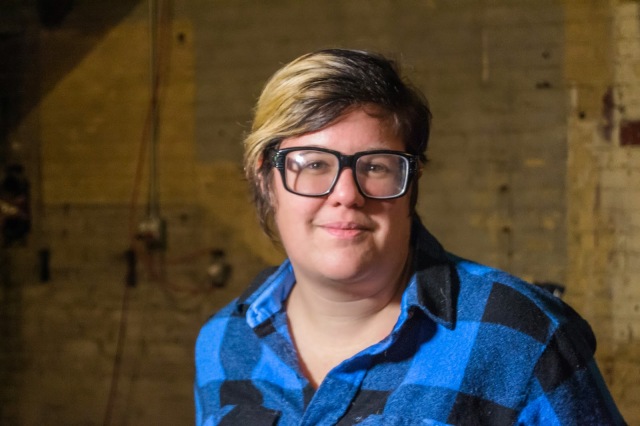 Because Detroit is a big small town we learned of a SOUP connection we didn’t know we had – Danny works with Amy’s twin sister, Lindsay.  Overflowing with friendly and positive energy, it’s easy to understand why Amy attracted the attention of the international press.  With all the excitement of the evening, I wasn’t sure she’d have time to talk to me and was pleasantly surprised to find she was more than willing to answer my questions about Detroit SOUP.

What do you love about Detroit?
I love the many opportunities and possibilities it can bring. I love the people. I love the humanness of it. I love the egolessness of it.  I love the lovely, caring folks who want to do something good in the city and I’m so lucky that I get to meet people like that.

How have you seen Detroit SOUP change in the past 5 years?
It’s changed and it hasn’t.  We moved from the Mexicantown bakery to a spot in Corktown.  Then we moved from Corktown to the North End.  Just being in the Jam Handy has been a draw in itself, people love being in this space. It’s warm and inviting. It’s in a neighborhood you’re not familiar with.  I’ve seen the numbers grow and shrink and grow again.  The projects get better and better and better.  The ideas are thoughtful and succinct and good. They’re just good ideas.  People say, ‘I don’t even know what I’m going to vote for these are tough choices’. Or maybe it’s, ‘This idea is so great, we need this in the city’. I like the collectiveness – that has never changed. I love the experimentation of it – that hasn’t changed.  It’s been growing slowly – now we’re in 9 neighborhoods around the city as well on top of the city-wide SOUP.

This is the city-wide SOUP.  How often do neighborhood SOUPs meet?
Those are quarterly.  Right now Hamtramck has a SOUP going on the same time we are.  Grandmont-Rosedale, Brightmoor, the Livernois cocorridor, the central communities by Focus: HOPE, the North End also have their own separate SOUP which I think is really important.  Downtown has a SOUP and people are like, ‘Why does downtown need a SOUP?’ But you need a place to have those conversations around gentrification, thing are changing so fast – how do we still save Detroit amidst all of this change? And we also have the Jefferson East corridor which is basically the Villages up to Jefferson-Chalmers on the Grosse Pointe border.

I feel like this program is a signature millennial thing but I see a diverse audience here.
Yes: young, old, black, white, different ethnicities, I’m sure different religious backgrounds too.  It changes all the time.  As you saw when I asked people to raise their hand, for 75% of the room it was their first time here. I think it’s one of those things that you experience and then come back six months later or you come back a year later.  The projects are different but the format stays the same.

What are you looking forward to in 2015?
I’m excited for our fundraiser.* I’m excited to start a SOUP in Nepal and Tunisia.  I hope that this experience and exposure helps us start SOUPs in other cities.  I’d really love to help people think critically and thoughtfully about doing this in their city. 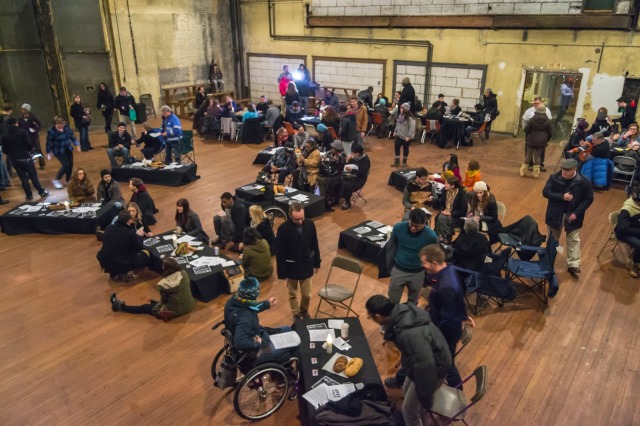 Detroit SOUP was a fantastic experience. A purposeful and affordable night on the town.  I highly recommend checking it out and here’s what you can expect:

7:00 p.m.: Amy introduces the event and gives the guidelines.  There are four candidates and each group receives 4 minutes to pitch their idea.  After the 4 minutes is up the audience gets to ask four questions to vet the project that will potentially receive their donated dollars.  The presentation session concludes with each food volunteer getting 60 seconds to share with the group.

8:00 p.m.: People can get in line for soup/salad/desserts that have been donated by food volunteers and talk about the project presentations.  Then they go to the voting booth and select who they want to go home with the evening’s funds.  The voting is an honor based system with no age limit (i.e. kids who have an opinion can make it count).

Tomorrow, I’ll post about the project proposals and the winner.

*Danny is hoping that our blogging awkwardness will be seen in the background.
**Detroit SOUP is celebrating its 5 year anniversary next month at Ford Field. I’ll post details when they are available.