This time last year I decided to convert my personal blog into a public Detroit blog. It’s been an interesting and exciting and to celebrate I wanted to look back at some of the things I did in those early weeks. One of my first interviews was with Chloe Sabatier of Chez Chloe. Danny bought my first lava cake for Valentine’s Day 2014 and it instantly became my favorite dessert. Eager to promote my new favorite find and intrigued by her experience in Detroit as a Parisian, I reached out for an interview. At the time, the blog had my old title, a rough layout and limited Detroit content. I can only imagine what Chloe thought of my email. Thankfully, I lucked out and she agreed to let Danny and I meet at her apartment for an interview. It was a nice but rocky interview (photography problems were 100x worse).
Throughout the year we’ve seen Chloe a lot. She knows the route for dropping lava cakes off to Danny at the hospital and I regularly spot her at Detroit vendor events. Since the treats are a staple for special occasions (I ordered hundreds of mini cakes for Carl Levin’s retirement party), we’ve developed a relationship with Chloe and when I asked for a follow up interview, she readily agreed.
2014 was a big year for Chloe too. It was Chez Chloe‘s first full year in operation. The company has grown a lot. When I want to get a last minute gift, I can now go to a local grocer to find a lava cake. She’s been featured in various articles and at events – including, Oprah’s The Life You Want weekend in Detroit! We met Chloe at Eastern Market Saturday to catch up and talk about how things have changed in the past year.

How was year one in Detroit?

It’s been a year and a half now. Everything is going very well- very – fast but organic. It’s growing slowly but surely. I got a new contract with Westborn Market, Plum Market, Whole Foods is coming soon, and Busch’s maybe. I got this big contract with Air France that is great because it is consistent. There is a flight every day. It’s going to be from Detroit to Paris on business class, the mini lava cakes will be served. It’s fun saying I work with Air France and my mom is coming in April and I know she will fly back with my lava cakes on board. People will be eating my cakes above the Atlantic – it’s amazing.

I also do Eastern Market because I love it and it’s a way for me to talk to my clients because I don’t have a shop. I need people to see me and interact with me. I need to know my customers as well. And [I do] the Royal Oak farmer’s market. I opened Chez Chloe’s Corner inside of Treat Dreams. The cakes are there everyday and people can have freshly baked lava cakes and ice cream. This is good because I can tell people they can come any day and the cakes are there.

You have done a lot, expanded a lot. Did you meet your expectations or exceed them?

It’s funny because I don’t push much but being at Eastern Market I will meet the manager of this market or this restaurant and they’ll ask me if I want to sell the cakes and I’ll be like, ‘Yeah let’s do it’. It’s very organic. People come to me, people are very helpful.  They help me find new business to expand the brand. This year my main goal is to be able to ship all over the country because I receive more and more phone calls from New York, from Seattle and I think I can output more if I say I ship nationally. It’s something I’m working on with my partnership with Eastern Market and Garden Fresh Gourmet. They created this organization called SEED. They help entrepreneurs who are in the same positions as mine -they do farmer’s markets but want to expand more. Hopefully, they will help me ship nation wide.

It seems like you have worked with a lot of small business partners. Do you feel like it’s a unique environment in Detroit or that those resources are available everywhere?
That’s something I don’t really know because I’m in Detroit and I don’t travel much inside of the States but I think it’s something particular to Detroit. I just saw a picture from a friend of mine who posted it while she was in New York, there are advertisements that say this restaurant is hiring in Detroit, move to Detroit. Graffiti that says move to Detroit. Even my friends in France send me articles that have five pages about Detroit in French newspapers. My friends know I’m in Detroit so every time they see something it catches their attention. There are a lot of things going on here, more than in other cities. There is more opportunity. It’s not just the people who want to create something, it’s the customers and people living here – they want these new businesses.

How has Detroit changed since you have been here?

It’s changed a lot. When I moved here it was two years ago. The Riverfront was not the same. The restaurant choice was very very limited. Now we can not even keep up with the new restaurants. I have to go online on Eater to see what’s open and I know there are about four new restaurants that I haven’t seen yet. New breweries, new bars and all of them are packed. Now on Saturday night we can not even eat at a restaurant. There is a line for an hour and a half to two hours – we have to stay at home. It’s amazing. It’s a great problem to have in Detroit. It’s going the right way, it’s totally safe. Now I don’t think people are scared to come here. I think maybe two years ago, there was some ‘it’s not safe’ but now if there are still people wondering if it’s safe, those people are stupid. If you come here you see. I’ve never had an issue living here. And living in other cities – Paris for example, in the Metro I’d have people talking to me or looking at me weird or trying to flirt and here never. That’s something I like.

New flavors, I want to work with a professional baker. National shipping. Selling in more stores – Busch’s and Whole Foods. And that’s pretty much it. 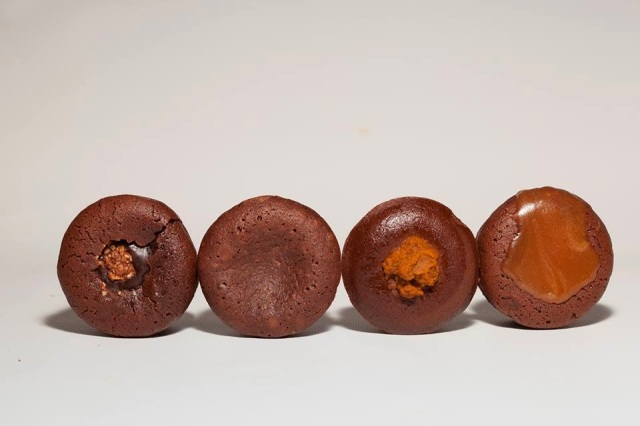 Lessons in Business from Chez Chloe

I’m not an entrepreneur but the blog is a lot of work. I asked Chloe what lessons she learned this past year and her answers resonated with me. It’s easy to want things to be what you want them to be immediately but patience is key in business.
Photo Source: Mini Lava Cakes Chez Chloe Facebook

One thought on “Chez Chloe Follow-Up”