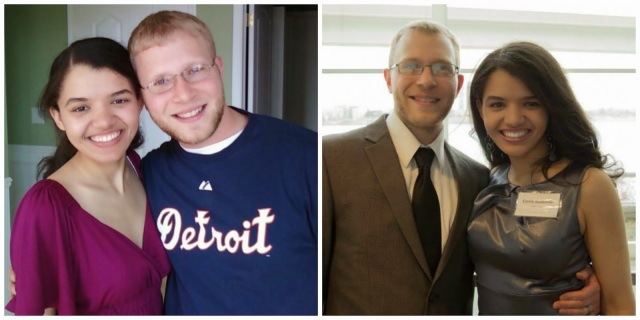 Five years ago today I was a nervous wreak.  I’d been crushing on Danny for weeks and now we were finally going on a date.  I remember rollerblading in the late afternoon and getting a call from him that he had a stomach ache (an omen).  I was sure it was an excuse and he was going to cancel but he didn’t.  Apparently, he just wanted to let me know.  I had very little dating experience and none in which a guy called me to talk for no reason.
I went on the date with a mission – to get a kiss.  I’d consulted my guy friends and they suggested drinks to help calm my nerves.  I followed their advice and had a couple Cosmos at the restaurant.  When I arrived I knew there was a good chance I would leave without attempting to get a kiss. Zero dating confidence and virtually no experience left me in a precarious position.  The odds went turned a bit more in my favor when I saw Danny with his glasses.  He looked so sexy I didn’t know how I would be able to keep my hands off him!  Now he insists that he always wore glasses but I worked with him for 5 years prior to our date and don’t remember him wearing glasses ever.
Since he wasn’t feeling well, Danny didn’t eat at the bar and stuck to beer.  The Cosmos helped me relax and we talked for hours.  It was fun conversation – typical date stuff – but part of it was me stalling.  I finally ran out of time and the waitress informed us that the bar was closing.  I remember feeling completely panicked.  We went outside and I don’t know what happened exactly but we kissed.  I’m pretty sure Danny made the first move because I was still too scared.  Afterwards I felt so excited (and accomplished – being kissed was on my to-do list) I wanted to jump up and down and scream.  I managed to contain myself long enough to get in my car and drive off.  In my excitement I didn’t notice Danny get pulled over.
When he called me at four in the morning to ask me if I had a nice date I was surprised and flattered.  Unfortunately, I quickly felt pretty awful because he told me his buddy just bailed him out of jail for a DWI. Just like he called earlier in the day to tell me he was sick, Danny didn’t call for a bad reason.  He just called because he wanted to.  It was a strange phenomena for me.  No one ever called and now Danny called me a lot.  He told me I could call him too.  It was such a simple thing but it meant so much to me.
Oh how things change, five years later I can’t get him to answer his phone.  But he still makes me feel special and that’s what counts.