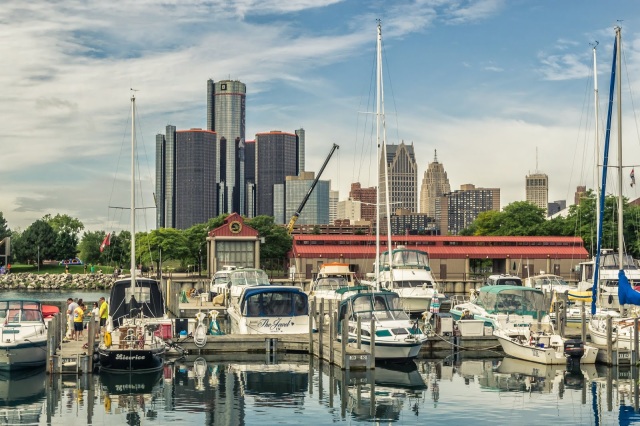 I’m ashamed to admit that it took us until this weekend to make it to the Riverwalk. Well, that’s not exactly true, I have been to the river many times but I haven’t done the walk in its entirety. Since we lost power Friday night we needed somewhere to spend our Saturday morning. It was a cloudy but rain-free day and we took Gwen for a long walk starting at the Renaissance Center and turning around at Harbor Town (so yes, we still have more to do).

The Detroit Riverfront Conservancy is one of Detroit’s greatest assets.  In a decades time, the non-profit organization has acquired development rights and transformed three and a half miles of the riverfront that spans Joe Louis Arena to Belle Isle.  This year it expanded further west as part of its plan to reach the Ambassador Bridge.

Historically, Detroit has benefited economically from its location on the water but I don’t feel like the river has truly been part of the city’s identity.  Cars, Motown and hockey, yes.  Water, not so much.  I imagine this is partially due to the fact Michigan is the Great Lake state and for a long time people could find more accessible bodies of water nearby.  Prior to the Conservancy, the river was virtually cut off to pedestrian traffic and those decades of disconnect have inevitably left many unaware of the beautiful public space that now exists.

Along the path there are numerous sights and activities: splash parks, boat docks, historical markers, picnic shelters and more. It’s the perfect place to walk, run, bike, relax and take in the city. The Conservancy provides both public restrooms and free parking lots.  The latter is especially significant to me because my suburban sensibilities are most pronounced when confronted with paid parking.

Considering the realities of Detroit I often find myself qualifying certain things to temper expectations – ‘This (location) is great but…’. The caveat is not necessary for the riverfront.  I mentioned last week how impressed I was by Nashville.  That city does many things very well but I took great pride in knowing our riverfront was more impressive.  The Conservancy does an incredible job and should be a  model for other cities looking to develop similar public space. My only critic is that there are no maps to show people where they are or where to find destinations on the river.  The map on the website and brochure is perfect and I would LOVE to see it posted in intervals along the trail.

I’m not an Eastside girl.  That side of town seems so far from most of the things I do and definitely the people I spend time with.  Nevertheless, the river tempts me. I could very easily get use to the idea of getting up in the morning and running or biking along the river.  Tomorrow, I’ll share more about why this area is hard to resist.

3 thoughts on “The Detroit Riverfront”