Saturday afternoon Mom, Gwen and I went to Midtown for the Jane Jacobs Walking Tour.  It was an event put on by the Detroit Design Festival.  The DDF took over Detroit last week and there were events all over town throughout the day.  The walking tour was the only event I was able to attend and I didn’t know what to expect.  Well that’s not entirely true, I expected a lot of people because 66 registered on Facebook.

The starting location of the tour was Model D headquarters.  Model D is an online magazine and my go-to for news about Detroit. I’ve attended various Model D hosted events but this was my first trip to their office and I was delighted to see it’s located in a beautiful old home (also a former coffee shop).  Since it was an unusually warm day, Claire Nelson invited people inside to rest and drink water.  Claire works for the Urban Innovation Exchange, another online publication that highlights the wonderful people who make up Detroit. 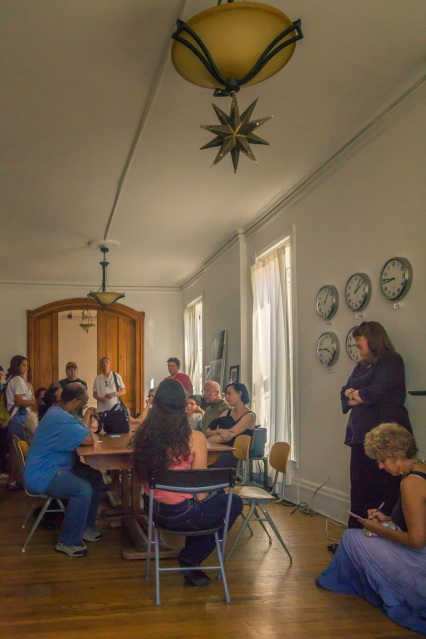 Claire was a fantastic host.  She talked about the history of the building and the recent investments in the neighborhood.  She did a particularly impressive job at keeping people engaged while we waited for the tour guides.  It turned out to be quite a wait and only one tour guide.  I’m not exactly sure what happened but it appears the tour guide left with the group of people she found outside the building, unaware of the large group that waited inside.  When this was discovered about 20 minutes after the tour’s original start time and Claire was unable to reach anyone by phone, she suggested we move to the Green Alley.

The Green Alley use to look like most alley’s – unwelcoming. However, it is now a peaceful pedestrian walkway and gathering place.  The project was developed by Motor City Brewing Works and the Green Garage who share the alley.  The Green Garage is a green business incubator that provides work space and resources to entrepreneurs.  The tour group included people who are part of the organization and gave some insight on how the alley is used.  For instance, events are held throughout the year, including movie nights for kids.  A white screen and projector are set up and people can bring blankets and chairs to watch a film.

What I found most interesting is that while the alley’s pavement is ascetically pleasing, it is also purposeful.  The tiles are set up to collect water used by the Green Garage and helps to prevent flooding. 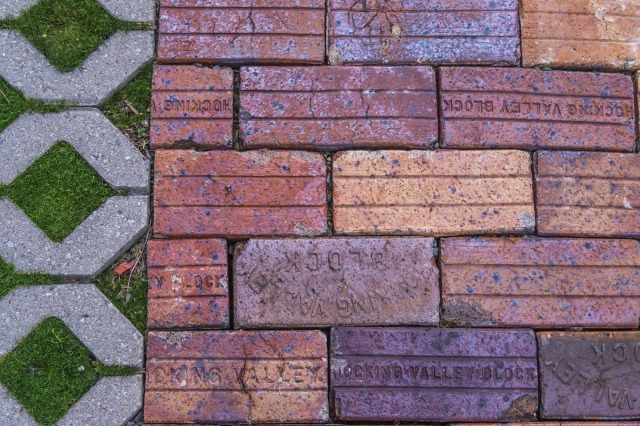 While we waited in the alley, the tour group crossed our path and we all set off for the walk. I’ll admit the tour was odd and not what I thought it would be.  There didn’t appear to be any commentary about Jane Jacobs or the locations we passed; although, I admit I was a straggler.  As I mentioned it was a large group. Not the 60 person number indicated on Facebook but I think 30 is a reasonable guess. With different walking paces and street lights the group was dispersed.  The result was a disconnect between the tour guide and the walkers leading many people to drop out of the tour.  The late start time forced me to be one of those people because I had to leave the city to get ready for my dinner date in the city.  For that reason I can’t say whether or not the silent tour had additional meaning.  A post-walk discussion was on the itinerary and may have provided more insight into Jane’s work and its significance.

Even though I left without a better understanding of Jane Jacobs’ influence on the city, I had a great time.  The weather was beautiful, the city is wonderful and I met a lot of nice people, including Bela Peshaweria. Bela moved to Michigan from England seven years ago.  She’s very sweet and has the best accent.  I did my best to conceal my Anglophilia but I’m sure I was only partly successful.

What brings you to Detroit?
I have family here.  It seemed like a really cool place at the time and I was itching for travel.  I decided to come here for a little while and really liked it and ended up staying.

What did you hear about the region from ‘across the pond’?*
Sometimes Detroit’s not always represented in the best light; however, I feel that once you come here and feel the spirit of the community and the projects that are going on, it really raises your experience and makes you feel really good about the city of Detroit.  You have to be here to feel it.

What are you favorite things to do in the city?
I like going to the museums and galleries.  The DIA is wonderful – especially now that it’s free. This is my first walking tour and I’m really excited about it. I love doing all the free things in the summer and walking around. I love going to the local businesses.

What would you like to see happen in the city?
I’d like to see a lot more support for communities. Better awareness of Detroit and what happens downtown.  A lot more of these walks or social gatherings.

What is something about Detroit that’s not so great?
Depending on where you go there’s a stark contrast between the good areas and… then you walk two or three blocks and it’s not the best experience. That’s a little alarming sometimes but I think the best part is that everyone is on the same page about moving forward. Everyone has a really strong spirit and it turns a negative into a positive.

My favorite part of the tour was our stroll down Canfield. West Canfield has been and probably always will be my favorite street in Midtown.  The house on the right reminds me of Rhett & Scarlett’s house in Gone with the Wind. Not surprising, it leaves me “pea green with envy” and eager to befriend some residents for a home tour.

*Sometimes you can’t stop the American in you.